Nisanth Kumar. B & and Aadharsh Prakash of II Visual Communication made a Documentary video for Nithilyam Special School and Adelaide rehabilitation centre – (NISSARC) and were awarded for their contribution to the organization on January 23, 2020. The video was about the mentally challenged and differently abled children and their challenges in day to day to life. “The video was too heavy that I couldn’t stand in the auditorium when it was played”, said Mrs. Gayathri Sampath – Founder Director of the institution. Nisanth added that, “It was one of the greatest experience spending time with these children and exploring their world. Thanks to my college for offering me such a wonderful opportunity”. 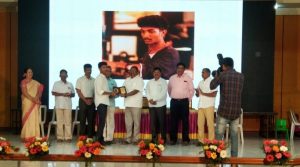 As a part of Kovai Vizha 2020, Siruthuli conducted an event “Maamalai Potruthum” on the 12th of January 2020. The focus of the program is thanksgiving to mother nature for bountiful monsoon rainfall in our region. This event had approximately 1000 curated participants from the civil society of Coimbatore participating. The event was facilitated by the Government officials.

As a part of this program, KCLAS – First Year Viscom Students have made a video for all awardees of all the NGOs and self-interest groups working with water bodies in Coimbatore and its surroundings. It was screened in the event to recognize the effort of the groups and also screened at various identified locations across the city. It was a great team from KCLAS Viscom to showcase their talents in making this video for the event.