The history of a liberal arts education dates back to classical antiquity. Stemming from the Latin word ‘liberalis.’ meaning “appropriate for free men,” a liberal arts education was a course of study considered essential for free citizens of Greece and Rome. The ancient Greeks and Romans viewed that a liberal arts education was necessary for citizen to take responsibilities in civic life. They studied three disciplines called Trivium – Grammar (languages), Rhetoric (oratory), and Logic. During middle ages this was extended to four further subjects: arithmetic, geometry, music and astronomy, named the Quadrivium leading to seven liberal arts subjects in the medieval liberal arts curriculum. The aim was to develop a person who was virtuous and ethical, knowledgeable in many fields and highly articulate.

India has always had a tradition of liberal arts education and had its presence in ancient Indian Takshashila and Nalanda Universities. Students came from across the world to study grammar, philosophy, ayurveda, surgery, politics, warfare, astronomy, commerce, music, dance, and much more. Philosophers, Scholars, Economists and even kings graduated from these Universities. But the fixed model curriculum the profound aspirations for professional degrees that the Liberal Education in India started to fade out from mainstream academia. But now with the Industry and society are seeking holistic individuals both in knowledge and skill Liberal Arts Education has gained significance.

Today, KCLAS is rooted in the Philosophy of Liberal Arts education of offering broad based education for holistic development with indepth understanding of the chosen discipline. It offers a curriculum designed to provide students with the knowledge and abilities to become successful, productive members of a society. While rooted in the foundational tenets, KCLAS looks forward to the fast-changing economy and society. Our vision to become a progressive research focused Institution that instills passion for lifelong learning and mould young people to impact the world. 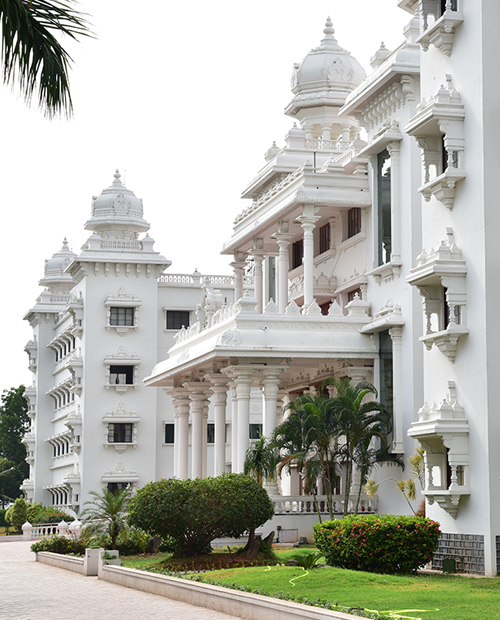 The holistic education model of KCLAS is built on the Philosophy of Liberal Arts Education and as a futuristic approach of OECD’s Learning Framework 2030. OECD Future of Education and Skills 2030 aims to build a common understanding of the knowledge, skills, attitudes and values students need in the 21st century. The learning and teaching frameworks are co-created by policy makers, researchers, school leaders, teachers and students from around the world. The strategies and approaches have approaches are built based on the Liberal Arts Education and OECDs Learning Framework 2030 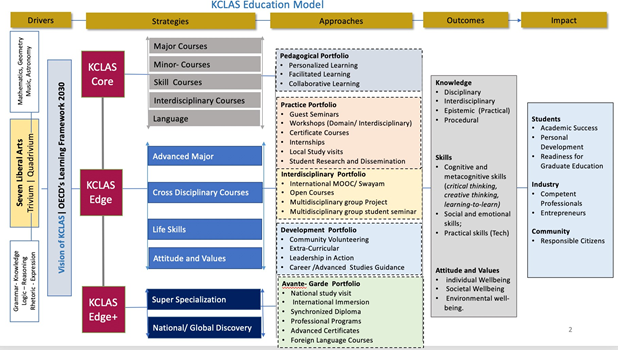 Liberal arts education is a good investment for enriching the future change makers of the nation and the world. . Studies have shown that one-third of all Fortune 500 CEOs have a degree in liberal education. 74% of the CEOs recommend a 21st century liberal arts educationSteve Jobs, perhaps the most storied CEO ever, brieﬂy studied calligraphy - which he leveraged superbly to create Apple’s unique identity. He said: “It is in Apple’s DNA that technology alone is not enough. Its technology married with Liberal Arts, married with the Humanities, that yields the results that make our hearts sing.”

As Albert Einstein put it, "The value of an education in liberal arts...is not the learning of many facts but the training of the mind to think something that cannot be learned in textbooks."