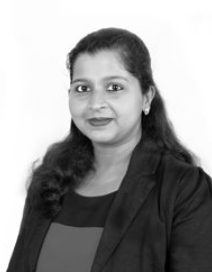 Anandha Karthik comes with an industry experience of 8 years, as a graphic designer and film maker specializing in 360 degree brand marketing, and has helped build some pretty cool brands, from the ground up.
A lover of film-making, typography, event management, photography and branding, she works from pencil to pen creating her designs. Working with clients from over 35 countries, for the past 8 years, she has a proven track record for translating complex ideas into slick and successful designs.
Transitioning to a career in academics, since February 2018, she was a Visiting Faculty at REVA University, Bangalore for MBA (Media Communication & Marketing Management specialization).
She has a keen interest in the areas of Typography, Media Literacy, Communication Design, Social Media and Design for Change & Development.

Zest for Life, Never Say No Attitude, Always with a Smile and Easily Adaptable.

My line of work has always been with an intention of “Design for Change”. I hope that one day, I can work at the United Nations HQ in New York, the field of Communication Design for Change & Development.

Life itself! Every person that I meet, is a page in my story of life, and they inspire and touch my life in their own way

Been working with United Nations (UNDP and UNFPA) as an Individual Consultant, on design and video projects for over 7 years, with the most recent being, a project with the United Nations Population Fund, as a Video Editor for Virtual Humanitarian Training.

Established and trained women for a Community Radio Station in Agra and won a national commendation for the same, from Central Command, Indian Airforce.

Curator, Researcher and Creative Design Head for a War Museum at Yelahanka Indian Airforce Base, Bangalore.
Recipient of the prestigious ‘Juhi Memorial Award’ from the Defence Services Staff College, Wellington.
Won an ‘Excellence Award’ for her Outstanding Contribution to the Media & Communication Department at Manipal University, Dubai.

Designed, Authored and Published 5 Coffee Table Books for the Indian Airforce & Ministry of Defence, including a book about 20 years of Aero India, which was launched by Air Chief Marshal Birender Singh Dhanoa.
Latest project is an augmented reality design for ‘Platinum Chronicles’, a book published by Harper Collins in April 2020.

Directed and Edited 6 short films and 5 documentary films, including a recent documentary film called “Riding to the Hounds” on the Ooty Hunt Club and the Equestrian Wing of DSSC Wellington.
Was the Project Head & Moderator for an International Webinar Series on ‘Digital & Media Literacy in Disinformation Age’, with 6 prominent experts in the field of Media & Information Literacy, from India, UK and Brazil. Was instrumental in getting UNESCO’s Global Alliance for Partnerships on Media and Information Literacy (GAPMIL) to partner with KCLAS for the event.